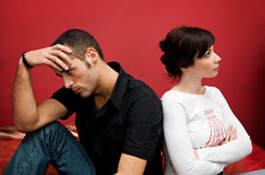 I generally find that when couples are experiencing difficulty, a huge part of the problem is the tendency to think that they are both having the same conversation when they really are not.  Anytime two people are engaged in a conversation, there is what one person says and what the other person hears.  Rarely are these two the same.  We all have our own filters, developed from our life experiences, through which we hear each others' words.  It only takes having different definitions for one word to throw a conversation off track.  As an example, if one partner says that s/he wants to know that the other partner is "committed" to the relationship, they may have completely different ideas of what that "commitment" looks like.  So Partner A might be spending all of his/her free time with Partner B and think that s/he is showing this commitment quite obviously.  But if Partner B thinks that commitment means sharing one's emotions openly and with vulnerability, s/he ends up feeling that Partner A is not doing his/her part and gets angry.  Then Partner A is baffled as to why s/he is being attacked and gets defensive, too.  And then we're off and running down a path that's hard to stop.

Whatever the problem, it is never all one person's doing.  And laying blame does little to solve the problem and doesn't stop the pain anyway.  It takes two people to make a relationship work and no matter what one partner may do wrong, the other partner has responsibility for how s/he reacts to it.  If we can start with the idea that neither partner wants to hurt the other on purpose, then we can look at arguments as a sign that someone is not hearing or giving a message clearly and therefore an indication that it's time to check in with each other.  If miscommunications are caught and corrected early in the conversation, it can prevent a fight and pave the way to a solution.  In counseling, it is often easier for an outsider to see when these miscommunications occur so that couples can practice this "checking in" process in a safe and controlled way.  Obviously, there is more to couples counseling than this, but you get the basic idea!